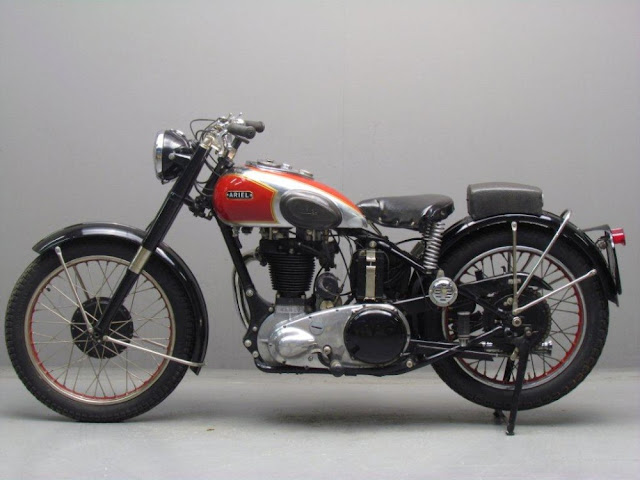 The Red Hunter was indigenous to the English Midlands. Ariel was based in Bournbrook, Birmingham. One of the original motorcycle manufacturers, it set up shop in 1902. By the \’30s, Ariel was doing brisk business – so was in a position to attract top talent. That meant high-calibre designers like Edward Turner, Val Page and Bert Hopwood. All three became icons of British bike-building. Turner, in particular, proved pivotal to the success of two-wheeled Triumphs.

Ariel produced a steady stream of stylish, yet practical machines. One of the best was the Red Hunter. It was among a batch of single-cylinder four-strokes from the firm. These bikes were a great success – and a godsend to Ariel. Financial woes forced the factory to close temporarily. Jack Sangster then took over the Ariel reins – from father Charles, the firm\’s founder. Sangster reached out to Val Page – requesting that he come up with something to save the sinking ship. Page\’s response was the Red Hunter. It would not be long before the ailing firm was up on its feet again.

The Red Hunter\’s top speed – 82mph – was pretty damned quick in \’37. Especially, from a 497cc motor. To extract that stat from just 26bhp was testament to Ariel engineering. Sadly, suspension tech of the era was not in the same league. Namely, girder forks at the front – and a rigid rear end! Even so, Red Hunter handling was impressive – given the constraints. At least, a comfortably-sprung seat helped make up for the deficiencies. That said – with its push-rod single-pot motor – it was never going to be the smoothest of rides. At the time, though, the Red Hunter was a luxury product. Certainly, it looked the part – resplendent in its \’red robin\’ plumage. As classic bikes go, the Ariel Red Hunter was really quite refined. And could shift a bit, too!