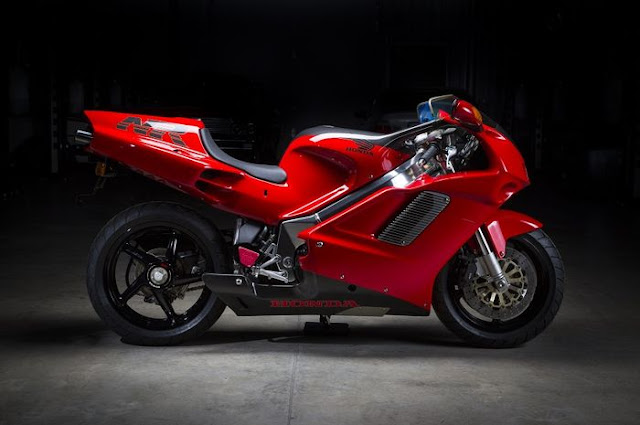 Few road-going superbikes are quite so race-bred as the Honda NR750. It was a direct descendant of Honda\’s NR500 GP bike. The NR roadster was released in \’92. That was a decade or so on from when the four-stroke racer had been slugging it out with Suzuki and Yamaha \’strokers\’. Well, trying to, at any rate. The plucky Honda was always disadvantaged against its free-revving two-stroke rivals. As a result, Honda\’s NR500 race bike was retired in \’81.

The feature for which the NR is famous is its oval pistons. To be pedantic, they were not actually oval. They were lozenge-shaped. The \’ovoid\’ pistons, then, were the NR\’s most clear-cut connection with its racing ancestry. Ultimatey – whatever precise form they took – they worked. The NR delivered 125bhp – at 14,000 rpm. Top speed was 160mph. That was notwithstanding the NR\’s weight – a tubby 489lb. While the NR\’s performance was impressive – it was not earth-shattering. Honda had done its best to pull a V8 rabbit out of a V4 hat. Effectively, to double it up. With that in mind, the NR\’s V4 engine was fitted with eight fuel injectors and titanium conrods. Four camshafts depressed thirty-two lightweight valves. Sadly, though, the modifications did not equate to twice the speed!

The NR\’s styling was almost as adventurous as its engineering. Its screen was titanium-coated, for instance. That was backed up by a brilliant finish – in every sense of the word. The paintwork and polished aluminium frame were particularly lustrous. The bike\’s build quality was equally dazzling. In every department, then, the NR delivered. Above all, it oozed charisma – mainly on account of its unique engine configuration. Bikes like the NR tend not to clock up too many owners. And not just because of high price tags and running costs. Such a machine grants access to motorcycling\’s inner sanctum. Arguably – more than any other roadster – the Honda NR750 mixed visual and technical exoticism. Put simply – glamour was never an issue!