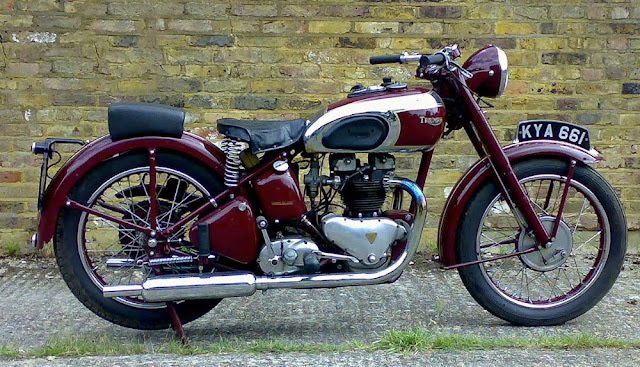 On the face of it, the Triumph Speed Twin was the quintessence of Englishness. But, it had Germany to thank for its existence. In 1902, two Germans – Siegfried Bettman and Mauritz Schulte – grafted a Belgian-made Minerva motor onto a bicycle. Believe it or not, Triumph was in business! Three years later, the Coventry-based company produced its own engine. It obviously ran well. Before too long, \’Trusty Triumph\’ had become a part of motorcycling vernacular.

The Speed Twin was launched in \’37. Its parallel-twin motor made it faster and smoother than its single-cylinder rivals. The 498cc motor made 29bhp. Top speed was 90mph – heady stuff, at the time. The new bike was the brainchild of Edward Turner. It displayed commercial courage – as well as styling skill. The motorcycle industry is inherently conservative. In other words, \”If it ain\’t broke, don\’t fix it!\” Single-cylinder \’thumpers\’ monopolized the market for years. Turner\’s Speed Twin broke the engine layout mould.

Mr. Turner did double-duty at Triumph. He was both head of design and general manager. His administrative tasks clearly did not impinge upon his creativity. The Speed Twin looked great standing still. And – with a dry weight of just 365lb – it looked even better, swinging through corners. Edward Turner – visionary that he was – had dreamed up a bike ahead of its time. The Triumph Speed Twin was a blueprint for many a motorcycle to come. \’Brit bikes\’ were on the march … and coming to a showroom near you!