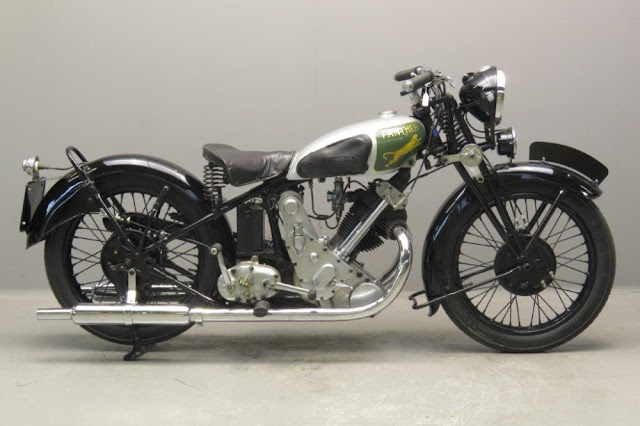 A swift glance at the Panther M100 showed up its most striking asset. Compared with your average engine design, the M100\’s looked distinctly skewed. Enter the 598cc Sloper motor. It was tilted forward 45°. If that caused technically-minded riders to be concerned about oil circulation, no worries. The M100 was eminently reliable.

The Sloper\’s cylinder block was blessed with a long stroke. 100mm, to be precise. Hence an abundance of neck-twisting torque. In a good way! That was handy – since many M100s had side-cars attached. This was before automobiles were two a penny. The M100\’s top speed was 68mph. If you were the one wedged into the Watsonian, that was probably quite quick enough!

Panther was based in Cleckheaton, Yorkshire. No surprise, then, that its bikes were solid, rugged and dependable. Panther started out as Phelon and Moore (P&M). The first Sloper-equipped bike appeared in 1904. The single-cylinder push-rod powerplant came with two air-cooled overhead valves. Sporting its dramatically-inclined mill, a parked-up Panther was guaranteed to draw a crowd. It was only made bigger by the way in which the exhausts swooped down from the steeply-banked ports. And this from a bike born and bred in Yorkshire … not a county associated with razzmatazz. As alluded to, this was a time when motorcycles and side-cars were still standard family transport. It followed that a Panther\’s top priority was to get from A to B – and back again – with a minimum of fuss. The M100 accomplished that – and with style thrown in, for good measure. Connoisseurs of classic motorcycles rejoiced!