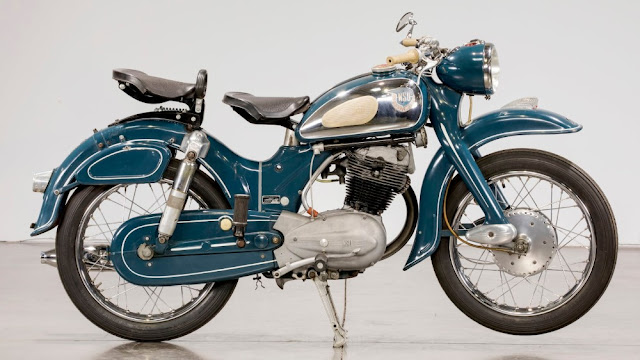 NSU began by knocking out knitting machines. Then it branched into bicycles. It built its first motorcycle in 1901. The German firm went on to release a steady stream of successful motorbikes – including, of course, the Supermax. It carried on doing so until the early Sixties. On both road and track, NSU was at the forefront of bike design and development. Cars, too, were added to its catalogue. NSU, then, deserves its berth in motoring history every bit as much as its illustrious compatriot, BMW. Well, almost!

NSU hit pay dirt when – in \’29 – it recruited Walter Moore. Previously, he had worked for Norton. Moore helped shape NSU\’s first bike to be fitted with an overhead-camshaft engine. No doubt partly due to his past employment, the result was not entirely dissimilar to the Norton CS1. Wags at the British firm suggested NSU was short for Norton Spares Used! Ignoring such ribaldry, Moore pressed on regardless. He must have done something right. By the time of the Second World War, NSU was one of the world\’s biggest bike manufacturers.

A decade after the end of the war came NSU\’s finest hour. The 250cc Supermax was launched in \’55. Thankfully for NSU, it lived up to its billing. The Supermax did pretty much everything well. Acceleration and braking were equally impressive. Handling-wise, too, it excelled. The mix of its single-overhead-cam motor, pressed-steel frame and leading-link forks was bang on the money. The Supermax sailed to a top speed of 75mph. Said performance, though, came at a price. Sadly, one which most motorcyclists were not prepared to pay. As a result, the \’60s saw NSU switch to car production. But not before it had secured its place in the annals of bike racing. In \’53 – on NSUs – Werner Haas won both 125 and 250cc World Championships. He was the first German rider to achieve such a feat. In \’54, Haas took the 250 title again. Indeed, \’55 found NSU taking the 250 crown for the third time in as many years. So, BMW\’s bike division always had a rival. NSU, too, produced a panoply of sublime motorcycles. None more so than the Supermax!