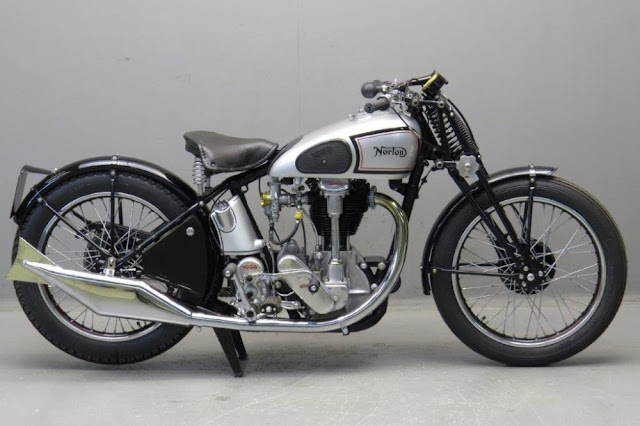 Classic Nortons are as iconic as Brit bikes come. That certainly includes the CS1. Norton was based in Bracebridge Street, Birmingham. In 1913, the fledgling firm went bust. In true champion style, however, it got back on its feet, dusted itself down and came out for another round! James Norton teamed up with Bob Shelley and his brother-in-law – ace tuner Dan \’Wizard\’ O\’Donovan. The chemistry must have been spot-on, if the Isle of Man TT was anything to go by. Rex Judd was among the riders to win on Nortons in that most iconic of road races.

The CS1 arrived on \’the island\’ in \’27 – prepped for its first TT. The \’CamShaft 1\’ production racer boasted a bevel-driven overhead cam engine. It was a sensation from the second Stanley Woods swung a leg over the saddle. Fast-forward a year – and the CS1 roadster appeared, in supersport mode. Again, rival marques were left reeling in its wake. Sadly, James \’Pa\’ Norton – company founder – died before his bikes saw success.

Before taking on the CS1, \’Wizard\’ O\’Donovan had plenty of practice. He built the Brooklands Special. It was designed specifically for the unique challenges of the legendary English oval. When sold, Brooklands Specials came with a certificate – confirming they had reached 75mph. Detuned Specials were sorted for street use. The roadster\’s sale certificate guaranteed 70mph – just 5mph less than the racer. So, the CS1 had a tough act to follow. It did so, though, with aplomb. Stylishly engineered, it sported silver-and-black paint – Norton\’s trademark colour scheme. It was a shame \’Pa\’ Norton\’s heart could not hold out a little while longer. Never really a businessman, he loved bikes to the core of his being. He would have loved to see and hear one of his company\’s masterpieces. Thankfully, at least the Norton CS1 has been exhilarating classic bike fans for many years since!